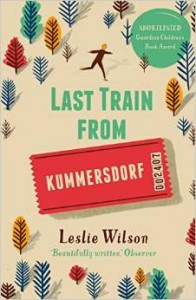 Germany, 1945. As the Russian armies close in, fourteen-year-old Effi is desperately trying to reach her father and the safety of the West. Streetwise Effi has learned that she must keep her secrets to herself so she’s wary when, hiding out in the woods, she encounters Hanno Frisch, on the run from the German army. But there are far more dangerous people on the road, and Effi and Hanno reluctantly team up in their bid to reach the West in the face of advancing Russians, German deserters – and Major Otto, who likes to play terrifying games with people before he kills them.

‘Leslie Wilson weaves a powerful, touching, amusing story of survival against the odds… This is a wonderful story for children, though it will appeal to adults too, and all readers will emerge from the story with their understanding deepened not only of the horrors of war, but of the way in which good, and love, can triumph over the most dreadful of circumstances.’
Rabbi Dr Charles H Middleburgh, Jewish Newsletter

‘Once you have read the opening paragraph you are hooked, and you do not want to put the book down until you have finished.. it is truly fantastic. I would recommend this book to any young person who is interested in the Second World War and for those who are studying it, it is a great read and you come away feeling that you have a wider knowledge of the war and the German civilian’s opinions on it.’
Annemarie Simmons age 14

‘It makes you think ‘what if?’
Katie Woff, aged 12, Education Guardian

‘A tale about Germany’s resistance to Hitler, of kindness amid horrors, of a fantasy coming miraculously true, and of growing tenderness between the two teenagers. For all its harshness, it concerns courage and love.’
Nicolette Jones, Sunday Times

‘Outstanding… this beautifully written book evokes horror through the eyes of two teenagers who have lost almost everything, but hold on doggedly, somehow, to the exuberance and optimism of their youth.’
Geraldine Bedell, Observer

Perhaps the greatest strength of this book, Leslie Wilson’s first foray into writing for children, is its ability to get under the skin of young people and describe their fears and mixed-up emotions in the face of horror.
Liz Buie The Herald

You can buy Last Train from Kummersdorf from Amazon HERE 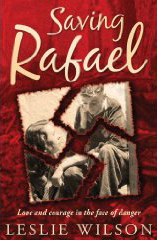 ‘A compelling novel of love and courage in the face of danger.’

I suppose, if you’re writing fiction about the Holocaust for young people, you might think it over first, plan your characters, consider what would be a nice ‘typical’ story. In fact,, I didn’t mean to write Saving Rafael. I didn’t want to write about Nazi Germany at all any longer, because actually it’s rather painful, if you’re half German, to write about that era, when people of your mother’s country did such terrible things. But an author’s mind is an odd thing, and subjects cook in the background and have a habit of coming out and ambushing you. Both while I was writing my previous war story for teens, Last Train from Kummersdorf, I’d read a lot about Jewish survivors who’d hidden in Berlin during the war.  I think the story that grabbed me most was the women’s demonstration in Rosenstrasse, in Berlin, in early 1943.

This was the time when Goebbels, the propaganda minister and Gauleiter (governor) of Berlin, decided to give Hitler a Berlin free of Jews for a birthday present. (Hitler’s birthday was in April).  Contrary to what had previously been Nazi policy, he decided also to remove 4,700 so-called ‘privileged’ Jewish men, who were married to non-Jewish German women  and up till then had been safe from deportation. They were taken to a building in the Rosenstrasse with the intention of getting them into cattle trucks and off to Poland to be murdered. But the wives arrived; first of all they just stood outside the building, hoping to get a sight of their husbands, then they started to shout: ‘We want our husbands back!’ It was a very courageous thing to do, given the brutality of the regime, and in fact, the police did try to drive them away, but they came back. They stayed in the street for a whole week, and, in the end, Goebbels gave in and released them.

These were women who had already endured a lot of pressure to leave their husbands, not least the fact that they suffered all the deprivations that were inflicted on Jews in those days – starvation rations, having to give up their pets, no flowers in the house, no radio, no telephone, no gas or electric cooker. And the constant anxiety about what might happen next.

I know something of those women’s stubbornness and love went into the relationship between Jenny and Rafael. It was all happening in some hidden part of my mind while I was thinking of writing quite a different novel.

Then one day, I’d given an exercise to an adult education class that I teach: imagine that you’re in prison, how did you get there? And I found myself thinking: yes, I’d quite like to try this myself. At once I thought of a girl, a teenager, in a girl’s concentration camp in Nazi Germany. And how did she get there? Because she’d been hiding a friend – no, a lover, who was a Jew. I told myself I’d just try a chapter and see what happened.

I knew there had been special youth concentration camps, so I went on the web and found a site dealing with the girls’ concentration camp at Uckermarck. Then I started writing. The ideas just spilled out, and by the end of a morning I had the introduction, much as it is now. The marionettes came in because for ages I’d had the idea of writing about a marionette-maker’s daughter. I’ve no idea why, it just appealed to me. But it was so grim, writing about that horrible place, that by the end of the morning I was in tears. So I told myself: No. I’m not doing it.

I went to bed feeling cheerful about the decision I’d taken. And then, the next morning I woke up and Jenny was talking to me. I was already thinking about her background, her family – I knew I was going to have to do this novel.

I found Saving Rafael completely gripping. Leslie Wilson is a great natural storyteller, and the background of wartime Berlin is absorbing and totally convincing.
Hilary Mantel, winner of the 2009 Booker Prize

‘The pace of this story is unhurried,  despite all the terror which permeates each day, for that rhythm is necessary if we are to sense the endurance demanded by those long years in the crumbling city. There are no easy resolutions, few joyful reunions. And yet the love between Jenny and Rafael remains undaunted, a gleam among the ruins of a mighty city and so many lives.’

I have finished SAVING RAFAEL, and am very impressed. It’s completely engrossing. I especially liked the bravery of Jenny and her mother, and the power of Jenny’s feelings for Raf.  I’m sure it will get great reviews when it comes out, and it should be on shortlists.’
Linda Newbery, winner of the Costa Prize for children’s fiction

There is an almost Anne Frank quality about the thoughts and aspirations of young Jenny.This is a book which is not only a compelling read, but gives deep insights into the moral and physical disarray of a nation which has allowed itself to be hijacked by one of the greatest evils of our times.

There were thousands of Germans who quietly opposed the Nazis; who sacrificed their lives defying them, and who risked everything to help the Jews in their midst. Leslie Wilson has performed a great service in reminding us of their courage.

Jamila Gavin, winner of the Costa prize for children’s fiction

It reads as if Jenny knew all this, saw all this, and tells it naturally from her personal experience.  I picked it up, meaning to glance at the first few pages, and ended by reading it for the next two days, completely absorbed.

Susan Price, winner of the Carnegie Medal and the Guardian Children’s Fiction Prize.

Saving Rafael was a book I couldn’t put down. Leslie Wilson has told a story full of excitement and tension, about how even under the greatest strain and fear, teenage love finds a way to develop and survive.

Mary Hoffmann, author of the ‘Stravaganza’ books and ‘The Falconer’s Knot.’

A fascinating portrait of a place and of people who don’t get written about very much and who are endlessly interesting: the rescuers.
Adele Geras, author of ‘Dido.’

‘This is a must-read for any teenager studying the second world war, as well as those who just want a gripping, intense and moving book. Highly recommended.’
Writeaway.

‘It is a story too little known.. Wilson clearly knows the place and period well, and her research shows – not obtrusively, but in the effortless authenticity of the picture she paints of life in Berlin, and the confidence the reader feels able to place in it.’
Armadillo

You can buy Saving Rafael from Amazon HERE 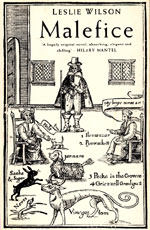 ‘Although the central character of this spare and elegant first novel is a witch, it is no more a ‘tale of the occult’ than ‘The Handmaid’s Tale’ is a futuristic fantasy. Wilson uses a seventeenth-century witch-hanging as the premise for a chilling examination of a community struggling to make sense of its deepest suspicions and resentments by denying them a human face. The accused witch, the clever and mutinous Alice Slade, has maintained power over her neighbors by knowing them better than they are willing to know themselves: of her murderous acts, she says: ‘You needed the harm, all of you, so I hurt you. You were ready for it.’ The night before Alice is to be hanged, the vicar, struggling with his shredded faith, tries to extract from her a conventional confession, in order to expunge her more convincing taunts. Meanwhile, her accusers, their voices closing in on the reader like a dark fugue, confront or betray the weaknesses she so successfully mined. Instead of setting witchcraft outside the pale, Wilson exposes the fragile boundaries between religion, magic, self-deception and madness. One looks forward to more from this writer, whose penetrating gaze would, in the world she has created, warrant hanging.’
New Yorker

You can buy Malefice online from Amazon.co.uk.

The Mountain of Immoderate Desires

Samule Pink has a secret: he is Queen Victoria’s illegitimate son. Educated in an obscure Dorset rectory, he is sent at the age of twenty-one to Hong-Kong, a far-flung outpost of empire with a dubious reputation. An innocent, he hopes, against the odds, to achieve a brilliant career, but finds that life in the colony in the 1890s offers more distractions than expected – what with Mrs Darley’s sexual invitations, the enticements of religious fervour, the social pressures of the Club – and Lily.

Samuel and Lily’s entanglement is complicated by the fact that neither is quite sure who they are. Samuel’s dubious birth confuses him; Lily, although born in Suchow, is too English to be accepted by the Chinese. And somebody is watching Samuel on his mother ’s behalf…

‘I did enjoy, and admire this novel so much. It satisfies on so many levels – it gives me that good story I always crave, it involved me with two moving and utterly believable characters, it transported me to turn-of-the century Hong Kong, and it made me think about all kinds of quite deep moral issues.’
Margaret Forster

‘Wilson has a vigorous imagination, and her novel, with its detailed canvas of Hong Kong a hundred years ago, is unfailingly fascinating.’
Financial Times

The Mountain of Immoderate Desires won the Southern Arts prize for fiction in 1997.

You can buy The Mountain of Immoderate Desires online from Amazon HERE.