I was born in Nottingham; my mother was German and my father was English and they met after the war, when my father was in the Royal Army Medical Corps. He was a nurse and stitched people up after operations.

I started to go to Germany when I was a baby; my mother used to take my elder brother Phil and me over to stay at my grandparents’ house in the Rhineland.

I was fed goat’s milk when I was small because the cows’ milk in Germany was alive with tuberculosis germs at that time. I don’t remember the goat at all, but apparently she ate the washing off the line.

It wasn’t easy growing up half German in the years after the war, and we were rather visible, since my grandparents divorced when I was eighteen months old and my grandmother came to live with us. She suffered from depression (see the Family Background section for the reason) and only spoke German. The other kids who lived around, who we played out with, heard us talking German and teased us about it. I guess that would have happened with any foreign language, but at that time people still felt very hostile towards Germany and Germans.

I can remember being called a mongrel – I used to say: ‘Well, mongrels are more intelligent!’ My brother had to play the German when the boys played war games, which meant he always had to lose. He didn’t enjoy this. Then there was one day when some of the bigger boys lay in wait for us both and threw mud at us, shouting ‘Hitler!’ And there were so many kids’ books and cartoons in which Germans were the baddies. I guess nowadays I’ve written the kind of books I wish my brother and I had had when we were teenagers. Books that show Nazi-era Germans as human beings, and show that a few of them were extremely brave. But though it was tough in many ways, I’m very glad I’m half German. It’s made me more thoughtful and I’m less likely to make assumptions about people because of their nationality or ethnicity.

I don’t want to make it sound as if I had a grim childhood. It was great to travel more than most of my contemporaries did – my parents got a caravan when I was seven and we went all over Europe, which I loved. I got to have all kinds of goodies that the other kids at school didn’t – I remember telling them about yoghurt, and them saying: ‘Yuk!’ Sounds ghastly! They’re surely eating yoghurt regularly now. We had apple juice, which you couldn’t get in this country, only Cydona, a fizzy apple drink. But also, when I was five, we went to live in Kendal, and not only got to ramble in some of the most beautiful countryside in the country, but also had the ruins of Kendal Castle castle for our adventure playground. It was just up the hill from our house and we’d go there and clamber all over the walls and into the towers. Most of the places we went to are barred to the public now. I don’t think we knew how lucky we were, but we did appreciate it.

The first book I got published was a novel based on my grandmother’s life in Nazi Germany, Mourning Is Not Permitted. Then I wrote a novel about a woman in the seventeenth century who was hanged as a witch, Malefice, and after that The Mountain of Immoderate Desires, which is set in nineteenth-century Hong Kong. I won the Southern Arts prize for fiction for that one.

I wrote Last Train from Kummersdorf for adults at first, but all the publishers said the main characters were too young. So I rewrote it for teenagers and it got published. Saving Rafael came after that, rather delayed because I had to have a tumour removed from my spine, which knocked me out for quite a while and slowed down the writing. But that’s all over now. So now I’m working on my third novel for teenagers, but I do have a draft of another adult novel in progress too. I’ve had short stories published and broadcast, mainly for adults, but I’ve had a short story about a Kosovan refugee lad published in an anthology, Give Me Shelter.

I live with a husband and a dog (Matilda). I have two grown-up daughters and four grandchildren, with a fifth due very soon. I like gardening, cooking, walking, photography and taijiquan. I am a member of the Society of Friends (Quakers).

Me as a baby in Linz

Phil and me in Lakes 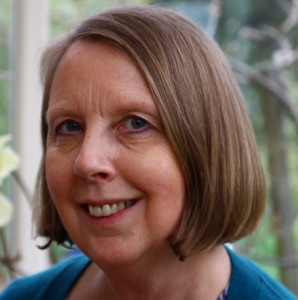